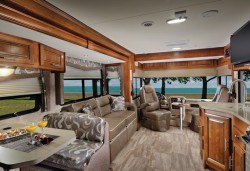 Eight weeks ago l parted ways from my corporate gig as CEO of BLiNQ Media and have been planning an epic summer trip with my family. My wife (Tovah) and I decided we wanted to see some of the great National Parks in the Northwest US as well as Western Canada (Alberta and British Columbia). We started off thinking we could just rent Airbnb’s and travel with a rented minivan, but soon realized traveling with our daughter Nina (3½), son London (1½) and our two dogs (40 lb and 80 lb) wasn’t going to be easy. So we then had the brilliant idea of doing this in an RV and it solved a lot of the space issues and gave us a lot of freedom to travel. We looked at renting a 22 foot RV but we needed to get something bigger and it was more cost effective to just buy something, especially for a 3+ month trip. Within 10 days we went from renting to buying a brand new 2016 Forest River Georgetown 364TS. 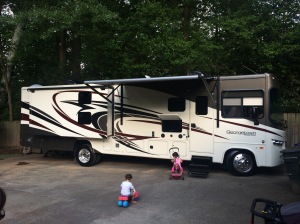 It’s an amazing RV that gives us a floor-plan and features that’s perfect for our little adventure. Prior to this experience, Tovah and I knew nothing about RV’s; I can tell you I learnt so much in that 10 days and buying one was an interesting process, especially as its a new model and we’d never seen or test driven one (did all our research online). I can also guarantee that this is the first RV of it’s size (38 foot, with our bike racks it’s 42 foot) to enter the Sherwood Forest neighborhood in Midtown Atlanta. And yes, I was able to back it into our backyard.

We worked with a local RV dealer called National Indoor RV Center (who have been amazing and i’d recommend highly) to special order the RV from the manufacture. It took around 3 weeks to deliver and since then we’ve been doing some test runs to make sure we know how to operate it and get used to living in a smaller moving house on wheels. We’ve also added some safety features and made some tech modifications that will make things easier. As I’m a tech geek, I figured i’d share some of these if anyone was thinking of doing what we are about to do.

Some tech I added

Our journey began Thursday June 11th and I hope to share some stories on this blog as well as Tovah’s blog www.gypsyspirit.net. In fact here is Tovah’s latest blog post; so follow us both and let’s see where this journey takes our family.

7 thoughts on “Yes, we bought a 38 foot RV for a epic trip across the NW and Canada”

This site uses Akismet to reduce spam. Learn how your comment data is processed.